Manifattura Falomo Starts the Giro 2014 in the Name of “Healthy Sleep”!

Manifattura Falomo in collaboration with Innergetic will sponsor the cyclists of the Tinkoff Saxo Pro Team for the 97th edition of the Giro. 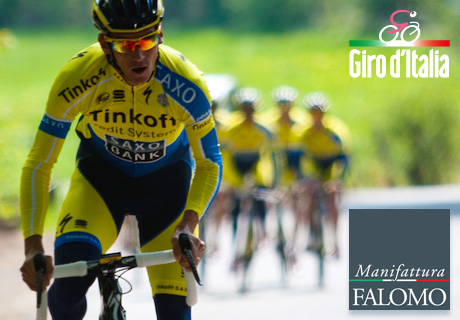 Find out in this article how Manifattura Falomo will contribute to cyclists’s sleep of Thinkoff Saxo Pro Team!

Every Day Cyclists Will Sleep on Manifattura Falomo’s Mattresses

Cyclists of Thinkoff Saxo Pro Team, for each of the 21 stages of the “Tour of Italy”, will sleep on a mattress produced by Manifattura Falomo.

Sleep Better at Night to Perform Better The Day After!

A truck containing Manifattura Falomo’s Innergetic mattresses will travel from hotel to hotel with the cycling team.

Falomo’s mattresses will be installed in their rooms in order to provide to the Thinkoff Saxo cyclists an optimal sleep to appear at the next stage’s start well rested and refreshed.

Follow us on Facebook, Twitter and Google+ and never miss a stage of the Giro 2014 in which surely will be featured cyclists of the Thinkoff Saxo Pro Team!