Silk: this is why we choose it for our mattresses

Silk is not only the noblest and finest of fibers but also one of the most ancient known to humankind. 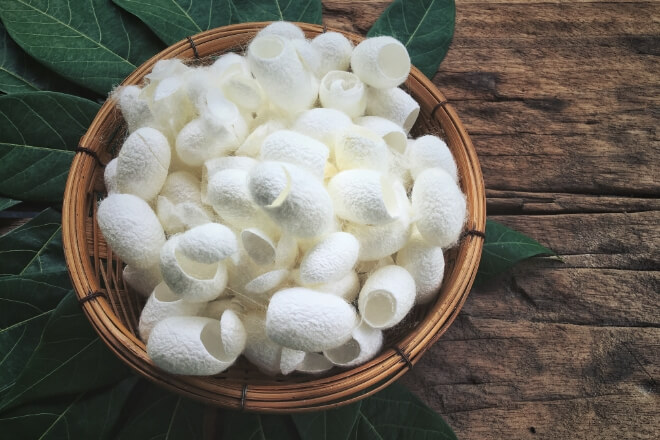 Discover in our article the origins of this precious fabric and why we chose it for the production of our mattresses.

The ancient origins of silk

Silk was extremely precious in ancient China, and initially, only members of the royal family could wear it. Over the centuries, many things have changed in terms of processing techniques and use; however, its attractiveness has indeed remained unchanged.

Discovering silk, between history and legend

A Chinese legend tells us that the discovery of precious silk fabric dates back to 2700 BC, and is attributed to the wife of the great “Yellow Emperor”, Lady Hsi-Ling-Shih.

While the Empress sat under a mulberry tree, sipping tea in her sumptuous garden, a cocoon fell into her cup and began to unravel. That’s how the Empress noticed that a soft yet strong thread formed the cocoon.

The art of sericulture: Italy among the largest producers in the world

Silkworm breeding and the production of fabric is called “sericulture”. It is a real art, coveted by the rest of the world, of which the Chinese kept details a secret for more than 1000 years.

It was only around the 13th century that Italy became one of the largest silk producers in the world and still retains the title.

But what are the characteristics of silk and how is it used in mattresses?

Silk is a natural protein fiber produced from a single continuous filament obtained from the cocoons of the Bombyx Mori insect, also called “silkworm” or “silk moth”.

Despite the large competition of synthetic fibers, we choose silk for the padding and linings of our mattresses. Here are some of its extraordinary properties:

Even “healthy sleep” is an ancient art!

Discover our Merinos Wool-Cotton Balance and Gran Pascià mattresses and the 4 Seasons Mattress Topper made with components in precious silk, to guarantee a regenerating rest all year round!